Skip to content
You are here:Home-Uncategorized-Luca Waldschmidt: 7 Things to Know About the Coveted £20m Germany Star

​Chelsea don’t have the greatest history when it comes to signing German players.

Antonio Rüdiger has been a success at Stamford Bridge and fans will rightly be quick to point out what impact Michael Ballack had in west London, but the likes of Marko Marin and Sebastian Kneissl are just as famous for how uninspiring they were at Chelsea.

SC Freiburg’s Luca Waldschmidt could be the next star from Die Mannschaft to make the move to the Premier League, with Chelsea apparently eyeing the 23-year-old in a £20m move at the end of the season.

Considering he’s playing his club football in Germany’s Black Forest, it’s no surprise to see a few raised eyebrows at links between Waldschmidt and Chelsea, but here’s just a handful of reasons why the young forward could be a big success at Stamford Bridge.

Show Him Onto His Right Foot 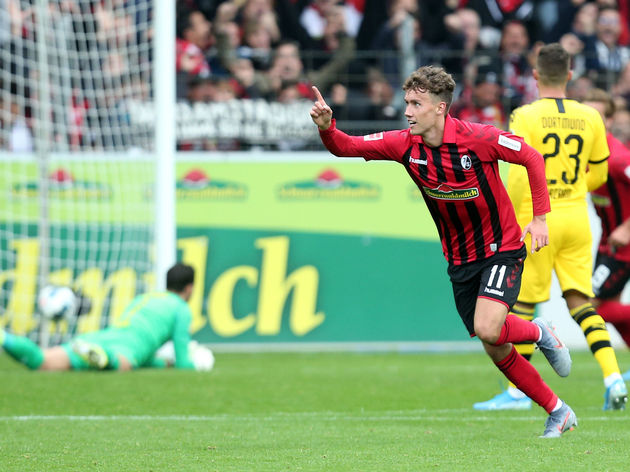 Waldschmidt has only just reached 100 senior appearances at club level and his career is still in its infancy, but fans in the Bundesliga know all-too-well not to let the Freiburg star onto his stronger left foot.

16 of his 19 first-team goals have come from his left foot, including all of Waldschimdt’s strikes this season, while he hasn’t scored on his right or with a header since May 2019.

Not a Typical Striker

Even as a centre-forward who is potent inside the box, some of Waldschmidt’s best performances have actually come when he plays in a slightly deeper role, just between the striker and attacking midfielder.

There he’s able to have more of an impact on the whole game, while also feeding off any knockdowns from Freiburg’s tried and trusted target man Nils Petersen.

He’s From a Footballing Family

The Waldschmidt’s are hardly the most well-known footballing family there is, but Luca’s father used to play for Darmstadt in the 1980s.

His cousin, Sven Waldschmidt, is also a centre back for fifth-tier side TuS Schwachhausen.

He Scores a Variety of Goals

Although almost all of Waldschmidt’s goals have come from his left foot, the 23-year-old can still score from any situation, anywhere on the pitch.

He’s earned a reputation for his ability from outside the area, but Waldschmidt’s also shown he’s more than capable when it comes to free kicks, while he’s a bit of a specialist from 12 yards too.

Five of his six penalties at senior level have ended up in the back of the net, while he even followed up the one which he missed – against Wolfsburg during the 2017/18 season – to eventually get his name on the scoresheet.

Football players are synonymous for having a lavish lifestyle, but Waldschmidt certainly breaks that mould. Rather than showing up to training in a fancy sports car, the 23-year-old takes a Vespa to Freiburg’s training ground.

Star of the Under-21 European Championships

Waldschmidt’s been playing at a senior level since the 2014/15 season, but it wasn’t until the Under-21 European Championships last year when the forward really started to make a name for himself across the continent.

Although the talented Germany side finished as runners up, losing to Spain in the final, it was the competition which Waldschmidt made his own.

Napoli’s Fabián Ruiz was voted as the player of the tournament, but Waldschmidt took home the Golden Boot and even made a bit of history in the process, with his seven-goal haul matching the competition’s all-time record for a single tournament.

He Loves a Late Goal

Waldschmidt is always a player to watch out for when opposition teams travel to the Black Forrest, but the Germany international really comes alive in the latter stages of a match.

12 of his 19 senior goals have come in the second half of games – another came in extra time in Germany’s domestic cup competition – while he’s only scored six in the first half throughout his first-team career.

Out of those second-half goals, six have come after the 80th minute.

Including youth level, Waldschmidt’s scored 21 match-winning goals, although only six of those have come since he stepped up to senior football.

thank you for your information,what’s next?