​In a game of master versus apprentice at the Tottenham Hotspur Stadium on Sunday evening, it was the latter who came out on top with relative ease.

It was meant to be a great afternoon for Spurs; a victory over their bitter rivals, and Jose Mourinho’s former club, to send them into the top four at the expense of Frank Lampard’s Chelsea would’ve been the perfect Christmas present.

And when the Blues’ starting XI was announced an hour before kick off, many believed that the likelihood of a Spurs victory had increased tenfold. However, Lampard’s bold switch to the 3-4-3 would, in fact, prove pivotal in their impressive 2-0 win over the in-form North London outfit.

In possession, the use of wing-backs ensured the Blues made the pitch as big as possible and it was on their left flank where they had the most joy. Marcos Alonso – who returned to his favoured ‘Antonio Conte role’ – played particularly high and it was his positioning, along with Willian’s movement, that forced Lucas Moura into unfamiliar defensive positions and caused confusion between Moura, Serge Aurier and Moussa Sissoko over who to pick up, especially when a Chelsea central midfielder helped create a wide overload.

Centrally, it looked like a mismatch on paper, and that’s exactly how it panned out. Although it was two-versus-two between Mateo Kovacic/N’Golo Kante and Eric Dier/Sissoko, the inward movement of Mason Mount – who lined up as the Blues’ right-winger – ensured that Chelsea constantly had a man spare in midfield.

Tammy Abraham’s occupation of Spurs’ two centre-backs and the positioning of Cesar Azpilicueta made sure that Jan Vertonghen couldn’t follow Mount inside, meaning the 20-year-old was always available between the lines – often causing the hosts problems in transition. 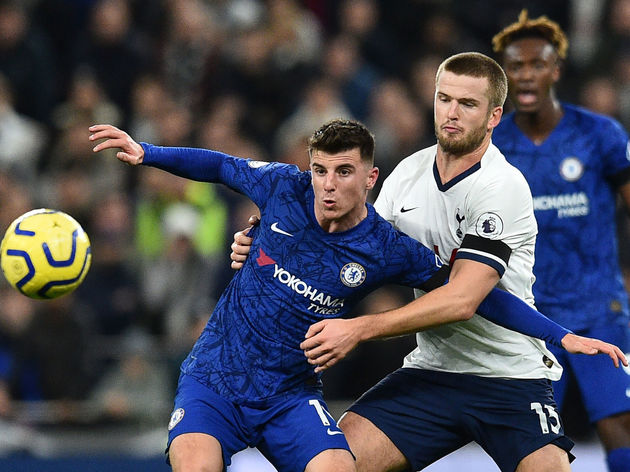 On the whole, the athleticism of Chelsea’s midfield two and Mount meant that defensive midfielder Dier was constantly bypassed – highlighted by the fact that the Englishman made zero tackles and interceptions in the first half.

While on the ball they were fluid, it was their performance off the ball that went a long way towards them claiming all three points.

The aggressive nature of the two wing-backs enabled Chelsea’s front three to suffocate Spurs’ two centre-halves and left-back Vertonghen, persistently allowing them little time in possession. But, while Chelsea’s work ethic and intense nature off the ball was a major factor in their dominance, the deficiencies of Spurs shouldn’t be underestimated.

With Dier and Sissoko in central midfield, between them, you don’t have a player who’s comfortable of dropping deep to receive, turning and progressing play, forcing Spurs’ under pressure centre-halves to take the direct route – with another outlet, Aurier, largely nullified by Alonso as well.

However, with Lampard opting for a back three, this meant that the Blues were well-prepared for a long-ball barrage. And from a combined 19 long balls from Davinson Sanchez and Toby Alderweireld, only six were successful as Harry Kane cut an isolated, frustrated figure up top for the home side.

Chelsea’s centre-backs, meanwhile, completed just shy of 50% of their long passes (17/35) as Abraham often out-duelled Alderweireld, leading to the likes of Willian and Mount starting attacks after pouncing on the second ball.

And while the direct route into Kane wasn’t successful, neither were the vertical passes into the likes of Dele Alli, Heung-Min Son and Moura, as a combination of Chelsea’s midfield pair and Chelsea’s two outside centre-backs – Tomori and Rudiger – effectively sniffed out this option.

The use of the back three meant there was little space for Dele to wreak havoc in behind, which caused the in-form Spurs man to drop alongside Sissoko and Dier in an attempt to get on the ball. But, his inability to dictate play from deep as a result of his sub-par passing ability led to an ineffective and forgettable display from the 23-year-old. Another mini win for Lampard and his system.

Despite Chelsea’s two first-half goals coming from a combination of defensive lapses of concentration, individual brilliance and unforgivable errors, their dominance in all three phases of play certainly meant that their half-time lead was deserved.

The introduction of Christian Eriksen, a natural forward thinking player, for Dier at the break saw Spurs slightly improve as the 3-2-5 formation in Spurs’ build-up play became more prominent. However, Son’s sending off after 62 minutes prevented the hosts from staging a comeback and in reality, some Spurs fans would’ve been thinking about damage limitation.

So, the visitors, who had handled Spurs’ improvement comfortably early on in the second period could play on their 2-0 lead even more now that the hosts were at a man disadvantage. And with Chelsea’s front three essentially being three-on-three with Alderweireld, Sanchez and Vertonghen for much of the second half, they were a constant threat in transition – with MOTM Willian’s quality in possession on another level to anybody else on the pitch, he was superb.

Azpilicueta also continued to get forward and cause problems down the right as Moura was forced into a left wing-back role, with the Spaniard’s replacement, Reece James, doing a similar job.

Overall, it was a comfortable second-half for the out of form side as Lampard introduced Jorginho after Son’s dismissal to force the fatiguing hosts into submission. Their back three continued to frustrate Mourinho’s front men throughout as Spurs were only able to muster one shot on target in the 101 minutes of action, which was a Kane strike in added time that was expertly shut down and deflected by Tomori.

Any openings that the home side got were largely from wide areas and set pieces, but Chelsea’s defensive trio were fantastic from these situations as Eriksen and Aurier completed just one cross out of 12 between them (the quality of the deliveries weren’t exactly David Beckham-esque, mind).

So, with Chelsea picking up all three points in a fashion they couldn’t have imagined being so easy, what now for both of these sides?

For Spurs, the issue was clear and fortunately, it’s very fixable. Their lack of a confident progressive passer was key to their first-half struggles and it showed the importance of Tanguy Ndombele – who enjoyed a very tidy late cameo after returning from injury – to this side.

With the Frenchman in the team, you now have a player who can receive the ball deep and break lines at ease, ensuring the front four aren’t reliant on the ‘long ball’ method and ultimately, aren’t starved of service. While that isn’t all of Spurs‘ worries, the reintroduction of Ndombele will go a long way into seeing the Lilywhites play a brand of football that their fans love to see.

As for Chelsea, well, it’s simple: play this system as much as you can Frank, it’ll blow most teams away, especially if Willian continues to play on the left.

Who won between Chelsea and Totenham?